Ground-breaking platforms for in vivo  optogenetics and Ca2+ -imaging. 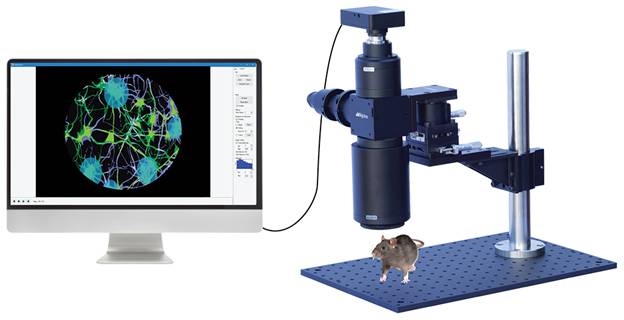 Simplistic Design for In Vivo Experiments

The OASIS Macro is designed for in vivo experiments with a minimalist design. A heavy-duty precision XYZ stage is mounted on the support structure and the OASIS optical assembly is in turn mounted on the XYZ stage. The XYZ stage controls the lateral motion as well as the focus of the system.

Reconfigurable In Vivo Mesoscopic Platform for Imaging and Optogenetics

Mightex’s OASIS Macro is designed as a reconfigurable optical mesoscope system for in vivo imaging and optogenetics. The final system can be tailored to performance requirements for unique applications. This can include major features such as adding a second and third illumination source, or a dual-camera imaging system, as well as fine details including compatibility features for certain cameras and objectives. 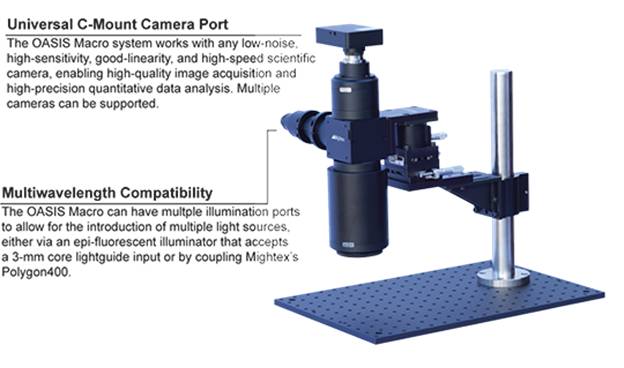 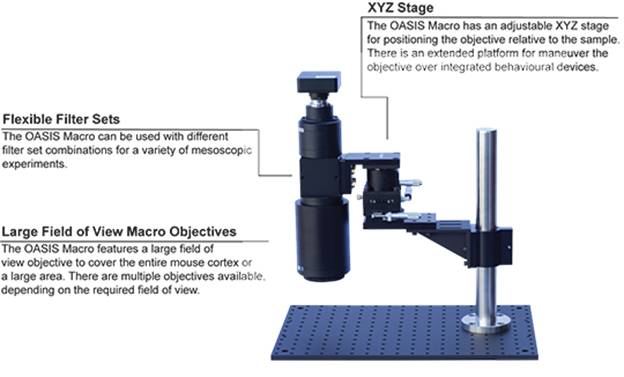 The OASIS Macro is designed to image the activity of thousands of neuronal populations across the entire cortex of a head-fixed mouse or large cortical areas of an awake animal. The lenses compatible with the OASIS Macro provide a large field of view, compared to conventional microscopes.

Perform region-specific targeted optogenetics or stimulate the entire cortical area with widefield optogenetics. The addition of Mightex’s Polygon400 to the OASIS Macro platform enables targeted patterned illumination of regions or cells of interest.